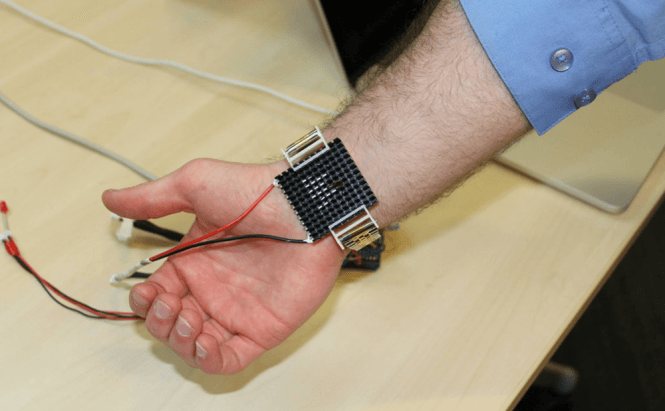 First seen as a prototype back in 2013 when it won the MIT and Dow Materials Engineering Contest (MADMEC), Wristify has now bloomed into a feasible and actually wearable gadget that is a finalist in Intel's Make it Wearable challenge. This bracelet is designed to help its wearers warm or cool the temperature of the body.

Created by MIT students Sam Shames, Matthew Smith, David Cohen-Tanugi and Megha Jain, Wristify is a wearable bracelet that sends cool or warm thermal impulses to your body. As the wrist is one of the most vascularized areas of the human body, quick changes in its temperature can rapidly influence the condition of the entire body. The developing team's studies have shown that the device can cool or warm your body at a rate of 0.4 degrees Celsius per second.

Stylistically speaking, the bracelet took a huge step forward in comparison to its previous public appearance (the one in the picture above), and its current futuristic-looking design (the one in the picture below) seems more approriate. The only concern one might have is that the wearable seems a bit large and may not look very well on people with small wrists. Don't get your hopes too high, though, the use of this bracelet doesn't mean you no longer need heaters or air conditioners as the changes in body temperature that the new device is offering are relatively small. However, the device can still save you a few bucks on your bills since it can reduce the power consumption needed for your heaters and coolers. Moreover, if the wearable is adopted by a large number of people, it may even prove to be highly beneficial for the environment.