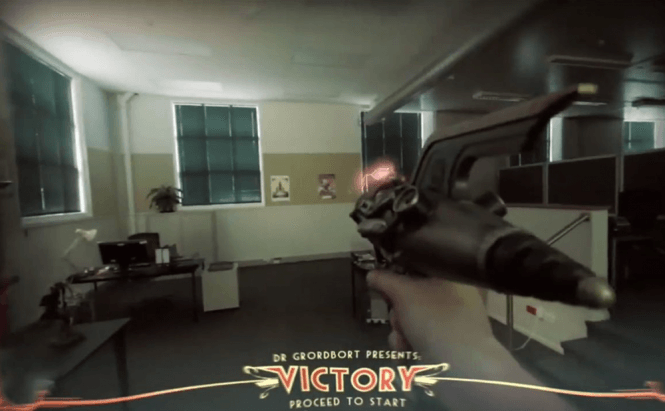 Lately, augmented reality has been one of the most talked about topics as everyone is speculating on its basically limitless potential, but the line between dreams and things that might actually become a reality is very thin. Now, we have one of our first looks into what this new technology can offer to the gaming industry, as Magic Leap recently launched a video to show off their latest shooter.

The game itself looks pretty cool (as you can see in the video at the end of this story) even though the action is a bit less "mobile" than I would have expected it to be. Augmented reality blends virtual reality with the existing environment, and since the video is shot in an office, I was expecting some exciting stuff such as ducking behind desks, or hiding behind a chair. However, the fact that the robots that are attacking come through holes in the walls or in the roof and that they don't walk through the objects that surround you (in real-life), is pretty awesome. Other noticeable details are the steampunk weaponry which look pretty cool and the fact that you can use the money that you get from killing robots to buy and place turrets that will help protect your location.

In case you were wondering what Magic Leap actually is, I can't give you as many details as I would like. It is a mysterious company focused on augmented reality which was founded in 2010 by Rony Abovitz and is funded by some big names such as Google, Qualcomm or Andreessen Horowitz. For a long while the business operated in stealth mode and this is one of their first projects to be disclosed to the public. Mr. Abovitz was scheduled to appear at this week's TED conference in Vancouver but suddenly canceled and made this video public instead. According to his statement, this was the game that his company wanted to unveil at the conference. Furthermore, the staff is already playing it in the office, so that seems to be pretty far along.

However, we have already seen a bunch of big promises from other VR and AR companies, but none of them has actually delivered on any of them yet, so I won't get too excited about this game until at least a playable demo of the shooter becomes available.