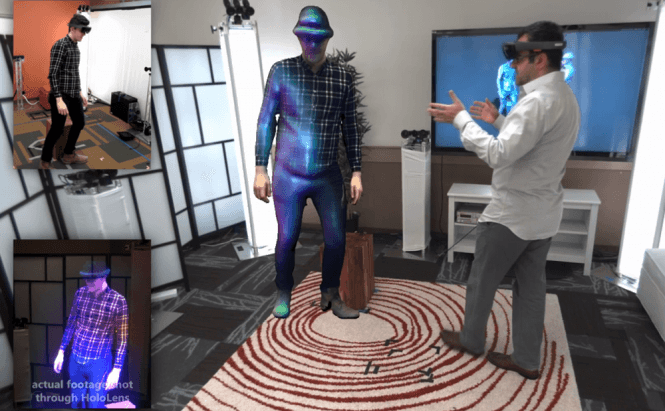 Today's technology is simply amazing and things are getting better and better with each passing day. We had video calls and holograms for quite a while now, but Microsoft Research has just merged the two together in a project called Holoportation. With the help of the HoloLens, people that are thousands of miles away will appear to be in your living room and you will be able to interact with them almost as if they were right there by your side.

Holoportation is a new technology which uses a series of 3D cameras to capture 360 degree images of a person and then transmits them in real time. Of course in order for you to see the other person's hologram you will need to wear the HoloLens device, which means that the two of you will never be able to make direct eye contact, but that seems like a small inconvenience. As you can see in the video, the technology has some glitches, so Microsoft Research still has a way to go, but in time things can only get better.

Besides letting you communicate and interact with the other person's hologram in real time, the Holoportation technology can also save the session as a 3D video, allowing you to look at it from any angle that you want at any time. Basically, it lets you relieve your memories from a different perspective and lets you manipulate the way the images are being rendered. I must admit that although the technology is still far perfect, I'm very excited to see how things evolve from here and the impact that Holoportation will have over our current technology.

If you're interested in Microsoft's HoloLens project, you should also check out Microsoft's games and apps for HoloLens.