Best smart locks for your home

Let's see how the idea of so-called smart houses works with our... front doors. 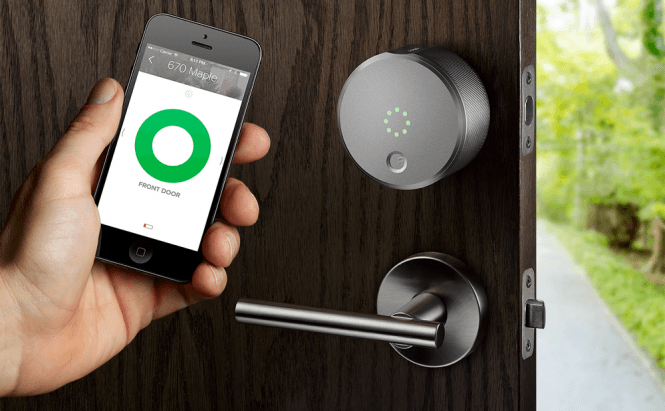 Best smart locks for your home

An 'intelligent' door lock is a great solution for those homeowners who want to get rid of key chaos in their bags and employ the latest technologies to strengthen their home security. Today's smart lock systems can automatically detect you from a certain distance, show you in real time whether the door is locked, supply you and your family members with electronic keys, provide mobile apps that easily assume control of the lock and much, much more. Captivated by these ideas? Read our article about three of the best smart locks for your home. The first on our list is Lockitron Bolt, a small and elegant successor to the previous version of the locking system simply called Lockitron. The rebranded product consists of three main parts: a smart bolt that replaces all components of your existing door lock, a special device called Bridge that connects the bolt to the web and guarantees remote access to it and, finally, a smartphone application programmed to unlock the deadbolt with a few clicks.

Thanks to the well-designed hardware components, the bolt is fixed onto a door quite easily, plus it enables customers to use a current set of house keys as a fallback. The bolt communicates with the mobile app either via Bluetooth Low Energy (if a user stands in front of the door) or the Bridge accessory (if a user wants to unlock the door remotely, from any part of the world). The free Lockitron Bolt app is compatible with iOS and Android platforms and has many features to enjoy. It may send you notifications when your door is being unlocked by a family member, automatically unlock the door once you've returned home and reached a certain distance and receive notifications from the bolt anywhere.

The smart locking system is available for preorder on the official website. The Kwikset company believes that smart security is the the synonym for best security. That's why it has developed an 'intelligent' Kevo bolt that can be unlocked with the help of specific software installed on your phone and a unique encrypted electronic key (or fob) called eKey. This key looks like a usual physical key but can be turned on and off to gain/prevent access to your home. You can reassign this key to another person and designate it as an Anytime, Scheduled or Guest eKey using your account in the mobile app. The app itself is very user-friendly and helps iOS and Android phone owners manage all Kevo users in one interface in a really secure and simple way. Like the previous model, the Kwikset Kevo deadbolt is a standalone bolt, but in comparison to Lockitron Bolt it looks rather traditional. The bolt exploits the SmartKey technology and connects to eKeys and fobs via Bluetooth.

The Kevo smart lock is available for purchase from online retail websites. The August lock is another decent home access product for IT enthusiasts. Developers claim that virtual keys are to replace common ones soon and offer their customers an ultimate solution. The August smart lock transforms your front door into a 24/7 tracking tool controlled by you from a computer, smartphone or an Apple watch. August 'hardware' joins the already existing deadbolt from the interior side and can't be seen from the outside. The bolt is made of the adonized aluminium and includes LEDs that show a current state of the smart lock. The mobile app, which is the command center for the August system, syncs the lock-phone information via a low energy Bluetooth (LEB) connection. The app runs on iOS and Android operating systems.

The stylish August smart lock can be obtained from the official website.