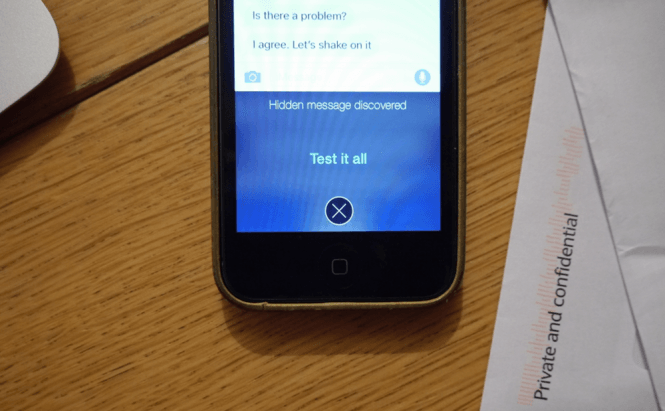 Privacy is very important, especially if you're a young adult looking to stay clear of the judgmental world that surrounds you. The good news is that there is now a cool iOS application called Kibo which allows you to embed hidden messages in your regular texts. This keyboard app works with whatever texting tool you are using (WhatsApp, Facebook, the standard iMessage, etc.) and doesn't cost anything. Unfortunately for some of you, it only works on iOS 8.4 or a newer version of Apple's mobile operating system.

The first thing you should know is that the secret messages only work if both the sender and the receiver have the Kibo app installed. In order to embed a secret message into your text all you have to do is to type it, then press the little padlock button which can be found between the "space" and "enter buttons". Once you do that, your hidden text will be encoded in a random, mundane message such as "Is there a problem?" or "Everything's cool, what about you?". Besides the fact that it works with basically any messaging application, Kibo offers several other advantages such as keeping the hidden text away from the messages history or the phone's lock screen and the ability to secure the secret with a password. As far as drawbacks go, the interface is still a bit confusing, and you might not always be able to tell when you're sending a coded text and when you're sending a plain one. Talking about Kibo, its developers (Group Logic, Inc.) stated: "Kibo solves the problem of users’ privacy protection when exchanging messages containing any secrets or private information. [..] People commonly believe that no-one can intercept their private messaging; however, their very personal messages are often seen by their friends, colleagues, and passers-by. So, we are aiming to provide a means of sending and receiving messages in a way that no-one except the sender and the recipient will be able to see and read them."

In case you were worried, Group Logic claims that Kibo uses a symmetrical DES encryption system so they can't read the content of the messages stored on their servers. If you're interested, you can download the application from the iPhone Informer. An Android version is being developed, but there's no official word about when it will arrive.