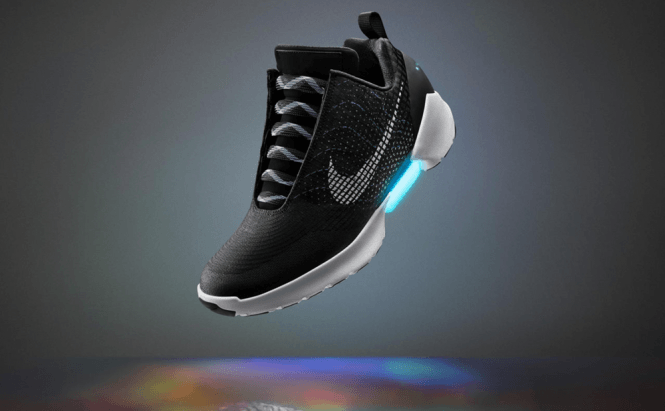 It's been a long time since we've been promised the hoverboards and self-lacing Nikes that we saw and loved in the Back to the future movies. To be fair, we've already seen both hoverboards and self-tying sneakers, but they were only prototypes, so it wasn't anything that we could actually get our hands on. Now, Nike has finally announced that it teamed up with Michael J. Fox and has started mass-producing its first sneaker with "adaptive lacing" technology, the HyperAdapt 1.0.

Some of you may be disappointed by the fact that the HyperAdapt 1.0 doesn't work exactly like in the movies, but the technology in it is quite spectacular. The customer simply steps into the sneakers and when their heel touches a specially positioned sensor, the laces will automatically tighten. What's even cooler is that the adaptive lacing technology which allows you to loosen or tighten the shoelaces with the help of two buttons placed on the side of the shoe. According to Nike's official announcement, the HyperAdapt will arrive on the market in the holiday season of 2016, and will be available in three colors. Unfortunately, there's no word yet on how much these sneakers are going to cost, but since they're the first shoes with this kind of technology, I'm pretty sure that it won't be cheap or even "easily affordable".

Talking about what will come next for this line of sneakers, Tinker Hatfield stated: "Wouldn’t it be great if a shoe, in the future, could sense when you needed to have it tighter or looser? Could it take you even tighter than you’d normally go if it senses you really need extra snugness in a quick maneuver? That’s where we’re headed. In the future, product will come alive."

Previous story 'Typosquatting': an increasing menace to PC and Mac users Next story PlayStation VR to go on sale this October for $399