This Google app lets you turn your phone into a lightsaber 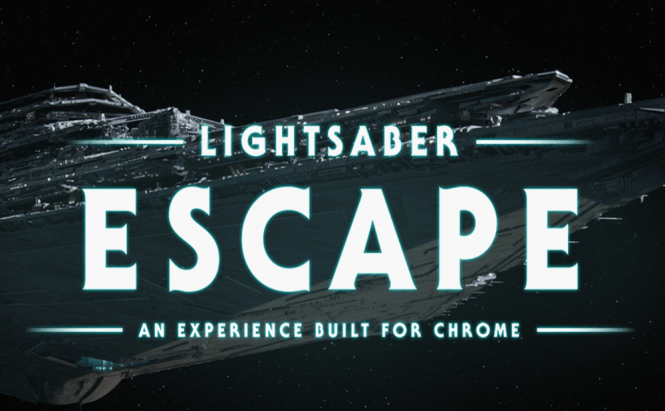 This Google app lets you turn your phone into a lightsaber

Star Wars: The Force Awakens just had its premiere, and the hype is at an all-time high. If you're a fan of the Star Wars universe who's totally excited about the movie, Google has just given you something very fun to do while you're waiting for it to get to a cinema near you. The IT giant has just launched a new game called Lightsaber Escape which lets you use your mobile device like a lightsaber and kill some Stormtroopers. What's really great is that all you need in order to play are an Android smartphone and the Chrome web browser installed on both your mobile device and your PC.

If you want to play, all you have to do is to go to Google's Lightsaber Escape webpage (use the Chrome browser to open it), then open the link that you will be given on the Chrome app installed on your smartphone and follow the instructions from there. Just a warning, this a Chrome experiment, so it probably won't work perfectly. In theory, the game is supposed to run on every Android mobile, but if you have a low-end smartphone, you will receive a message telling you that your device isn't supported. Furthermore, I've also had quite a few problems with Flash crashing on your PC, despite the fact that both Adobe's service and Google's web browser were up-to-date. As far as the game goes, it's actually pretty cool as it makes you use your smartphone as if it was the hilt of your lightsaber. On your PCs screen you will see a bunch of Stormtroopers shooting at you and your goal is to deflect the laser beams before they hit you. The synchronization between your smartphone's movements and the action on your PC's screen is quite cool, but what's even more amazing is that the Stormtroopers will actually hit you when they shoot, so you will need to bring your A game. For the full experience, I recommend keeping both your computer's and your phone's sound on.

If you're interested in more Star Wars-related games for mobiles, you should try Star Wars: Galaxy of Heroes which works on both Android and iOS devices. For a detailed history of the Star Wars universe in the gaming culture, I recommend reading the article that James wrote: "Star Wars milestones in gaming".