Facebook is rolling out a new tool called Messenger Day 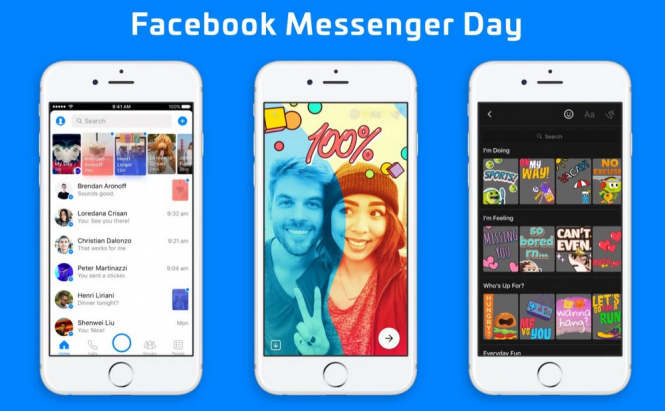 Facebook is rolling out a new tool called Messenger Day

After cloning Snapchat's Stories feature in Instagram without even changing its name and in WhatsApp as Status, Facebook is now doing it once more, this time copying the function into Messenger. After testing it out last September, the social network has just announced that Messenger Day is currently rolling out worldwide and that it's available for both Android and iOS devices. However, according to the IT giant, the purpose of this new feature is a bit different. As far as I understood, unlike Instagram Stories and WhatsApp Status which lets you recount memories from the past respectively things that have just happened to you, Messenger Day is supposed to be a feature for those looking to make plans and get their friends involved. However, the feature itself works just the same as the other two: you take pictures or shoot videos with the embedded camera , then edit them by doodling, adding face filters using facial filters or overlaying texts and share the resulted bundles on Messenger. Of course, you can choose who you want to share your Day with and the posts themselves are ephemeral, disappearing in 24 hours.

In case you're someone who spends a lot of time on Messenger, you may also be interested in reading some of our other stories related to this topic such as: "Best tips for Facebook Messenger users", "Facebook Messenger gets group voice calls on desktops" or "Facebook is testing out a Dislike button for Messenger".