US Smartphone Market Shares: 8% Growth for Android, 8% Drop for iOS 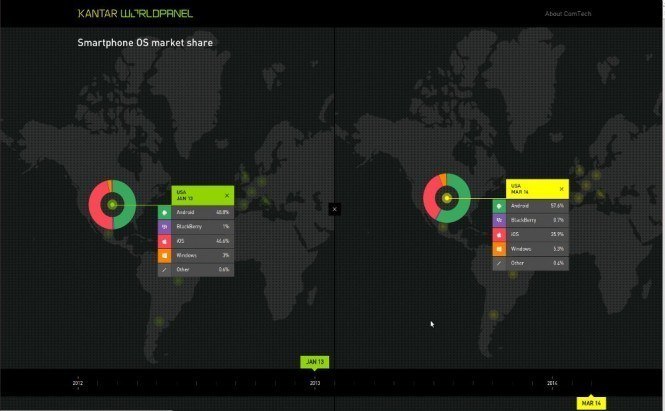 US Smartphone Market Shares: 8% Growth for Android, 8% Drop for iOS

According to the March figures, Android gained a huge growth on US smartphone market over the last few months (mostly at the expense of iOS shares). The exact numbers show that Android shares on the market in the first quarter of 2014 are 8.3% higher if compared to 2013, while iOS experiences a sharp decline of 7.8%. At the moment Android occupies almost 60% of the whole US smartphone market.

Similar patterns can be observed in Italy and China, however in Spain and Japan we may observe an inverse tendency with iOS growing 4.5% and 8.6% respectively, while Android is experiencing a 5.1% drop in Spain and a 4.5% drop in Japan. The overall figures show that Android saw a global growth of 1.52% and iOS starts the year with 0.1% global drop. Meanwhile, Microsoft, a real dark horse of the race, gained 1.76% of global growth. As Microsoft now owns Nokia – a company that knows much about how the mobile phone market works, it may now be only a question of time before Microsoft draws up with the two titans.