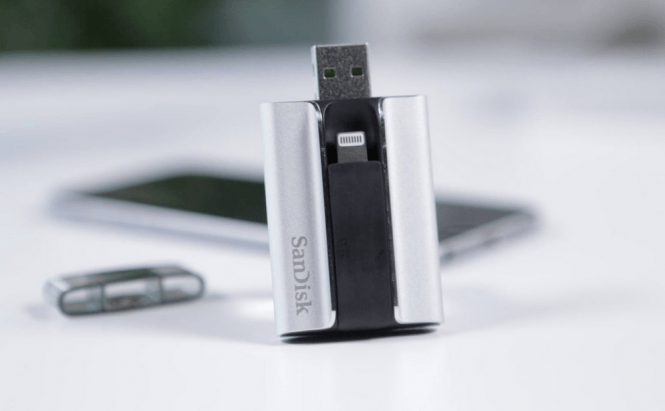 As you know, Apple's mobile products don't offer support for SD cards, and that's not too great for those who take a lot of pictures or like to store numerous media files. However, if you're running out of storage space on your iOS device and the gadget in question has a USB Lightning port, then there is a solution. SanDisk has just launched a new product called iXpand Flash Drive which, as its name indicates, can increase the storage capacity of your iPhone or iPad.

iXpand Flash Drive is an USB dongle that connects to your device through the Lightning port and lets you store additional data. The device comes with its own app and, after you install it on your phone or tablet, every new photo that you take or video that you record will be automatically saved on the dongle. Furthermore, iXpand also has an USB 3.0 port that allows you to connect it to a computer and transfer files. As far as compatibility goes, iXpand works on any device with a Lightning connector, no matter what iOS version you're using. However, SanDisk's disclaimer states that it works with "most soft and hard cases", which means that you should check if the dongle works with the case that you have before spending any money.

In case you're interested, there are four versions of iXpand available and you can choose one depending on how much space you need and how large your pockets are: for 16 GB you will need to pay $49.99, the 32 GB version will cost you $69.99, if you want 64 GB of extra space you will have to pay $89,99, while the $128 GB dongle will take $129.99 out of your pocket. If you're interested in purchasing iXpand Flash Drive, you should search for the product on Amazon or on BestBuy.

If you own an iPhone or an iPad, you might also want to read some of our previous stories like: "What to do when the browser on your iOS device gets hijacked" or "How to make a video recording of your iPhone's screen".